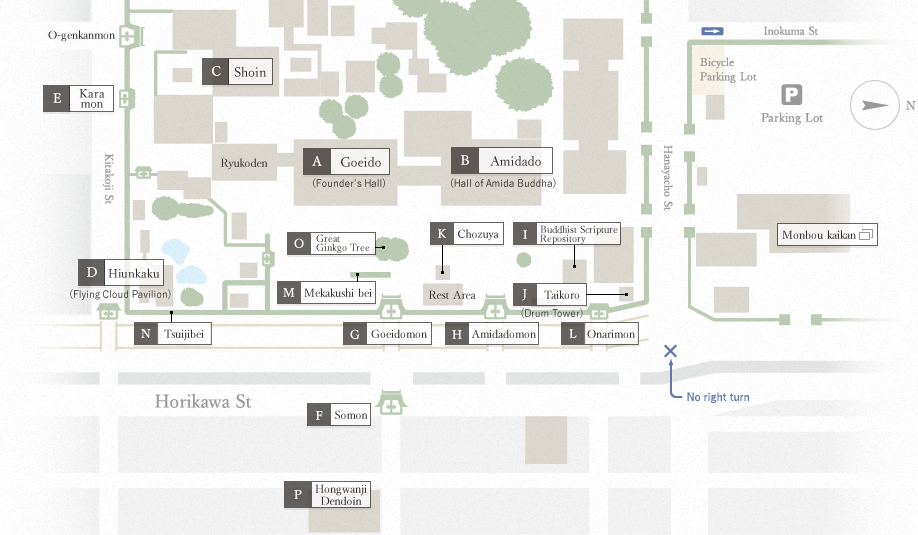 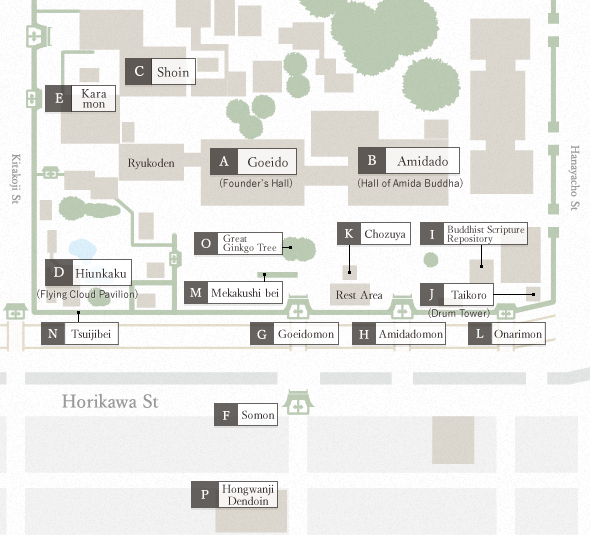 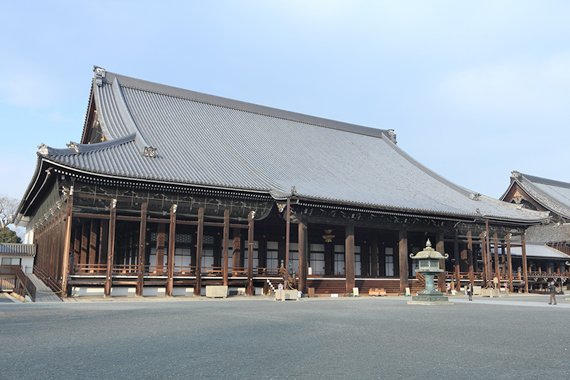 Built in 1636. Its dimensions are 62 x 48m with a height of 29m. A wooden image of Shinran Shonin, the founder of the Jodo Shinshu teaching, is enshrined in the central altar. The position of Monshu, Head Priest of our religious organization, has been assumed by successors in the founder's lineage. Portraits of successive Head Priests are displayed along the sides of Shinran's image.

Built in 1760. Its dimensions are 45 x 42m and stands 25m tall. In the central altar is a wooden image of Amida Buddha, flanked by portraits of six of the Seven Pure Land Masters: Nagarjuna and Vasubandhu (India), Tanluan, Taocho and Shandao (China), and Genshin (Japan). In the side alcoves are portraits of Shinran's direct teacher Honen (left) and one of the first patrons of Japanese Buddhism, Prince Shotoku (right). 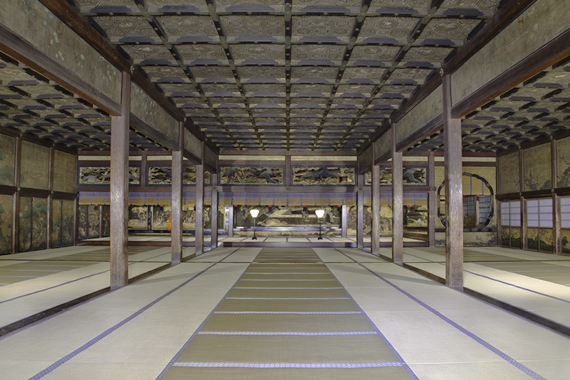 The Hongwanji Shoin consists of chambers richly decorated with wall and screen paintings of exceptional quality, those of which architectural and art style mostly dating from the late 16th century. The Shoin complex is roughly divided into two parts: Taimensho or Main Audience Hall, and Shiro Shoin or Suite of three decorative chambers. Located to the west of the Main Audience Hall are several auxiliary chambers, such as the Chamber of Sparrows, Wild Geese Chamber, and Chrysanthemum Chamber. It is not ordinarily open to the public.

Hongwanji has two outdoor Noh stages. The North stage, located in the courtyard north to the Shiro Shoin, is the oldest surviving Noh stage in Japan and has been designated as a National Treasure. On the other hand, an Important Cultural Asset, the South stage facing the south end of the Main Audience Hall is the venue of Noh plays performed annually to celebrate the birthday of the Jodo Shinshu founder, Shinran Shonin. Neither is ordinarily open to the public. 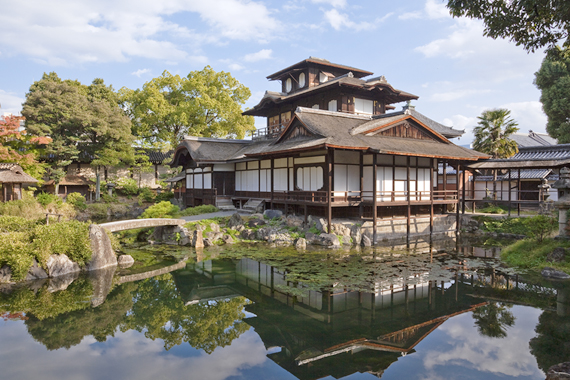 This three-story building is praised as one of the three noted pavilions in Kyoto along with Kinkaku or Golden Pavilion, and Ginkaku or Silver Pavilion. It is not ordinarily open to the public. 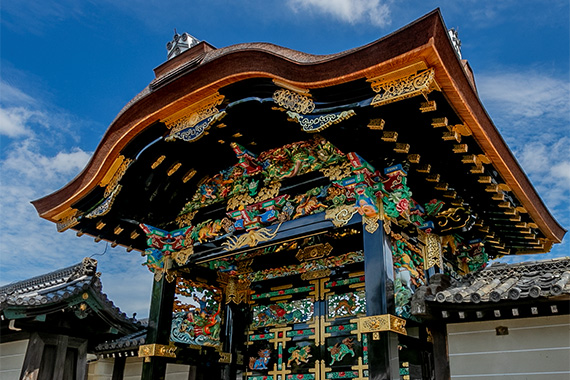 This four-pillared gate protected by a cypress-thatched Chinese-style gable is known as the "All day gate," saying that one could lose track of time and spend an entire day admiring its lavishly decorative carvings. It was made applying characteristics from late 16th century Japanese architecture. 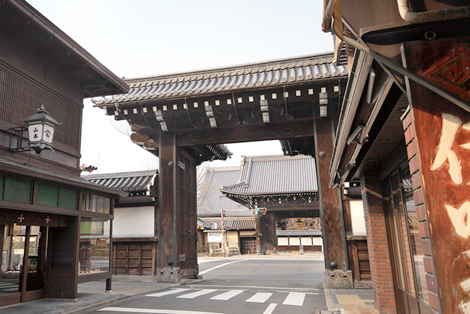 This gate was relocated three times. The first relocation was done when the 450th Memorial for Rennyo Shonin* was conducted in 1898, and in 1911 it was shifted again when the 650th Memorial for Shinran Shonin was observed. For the latest, in 1959, upon request from the city of Kyoto, the gate was moved to the present site when Horikawa Street was expanded in accordance with increase of the traffic of the road. On its curved beams sit a pair of large kaerumata.** Prior to its designation as an Important Cultural Asset, the gate was renovated in 2011. 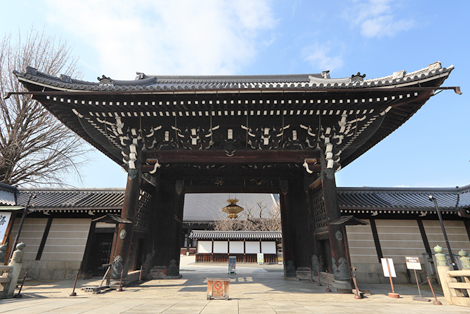 Although the exact construction year is unknown, a record shows that the gate was repaired in 1859 by a kosha* based in Osaka. In 1960, prior to the 700th Memorial for Shinran Shonin, the gate went through another renovation. For three years between 2006 and 2009, along with the restoration of the Tsuiji wall,** partial repair work such as, stonework, reroofing, and replacement of metal parts, of a variety of Hongwanji structures were conducted. On that occasion, many of the Goeidomon's roof tiles were replaced, however, some of the old tiles are still used on its south roof.

*kosha: 講 ko (lit., "lecture") originally refers to a gathering for listening to Buddhist lectures, and it later came to signify a group of people who appreciate the same teaching. In the context of the Jodo Shinshu community, 講社 kosha specifies an officially designated group of people who support Hongwanji in a variety of ways, such as donations in kind or volunteer activities.
**Tsuijibei wall: See "Tsuijibei" presented below in this list. 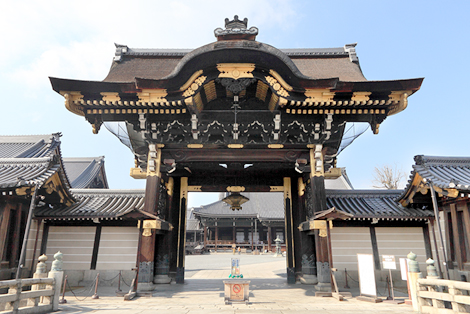 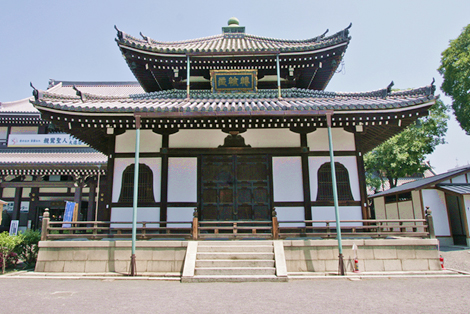 Built in 1678, contains the entire collection of the Tenkai Edition of the Daizokyo Buddhist texts. The collection is named after Tenkai, a monk of the Tendai sect who compiled the texts over a period of 12 years beginning in 1635. The following year, Hongwanji purchased the whole set of scriptures in 1648 from the Tokugawa government for approximately 100 kilograms of silver during the tenure of Hongwanji's 13th Head Priest, Ryonyo. 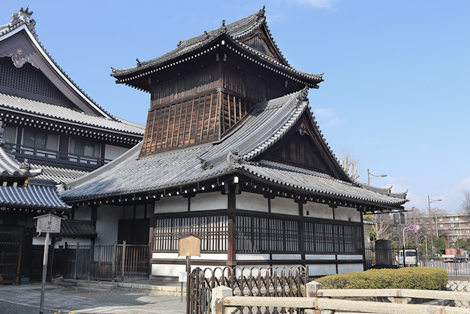 During the Edo period (1603-1867), the drum contained in the structure was struck signifying the time of day. This multiple-storied building situated in the northeastern corner of the Hongwanji precinct is believed to have once been used by the Shinsengumi, the armed police force organized by the feudal government at the end of the Edo period. 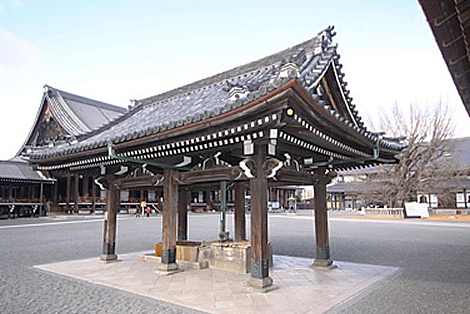 The place to wash hands. A large stone basin is set on the ground paved with square granite stones. The tiled roof over the basin is supported with six square pillars whose edges are elaborately trimmed. Along with the golden metal ornament placed on the diagonal bracing of the ceiling, decorative wooden beams inserted between the pillars add grandness to the structure. On its ceiling, wooden boards are jointed together without having a rib between them, and so it is called kagami tenjo or "mirror ceiling." Renovated in 2010. 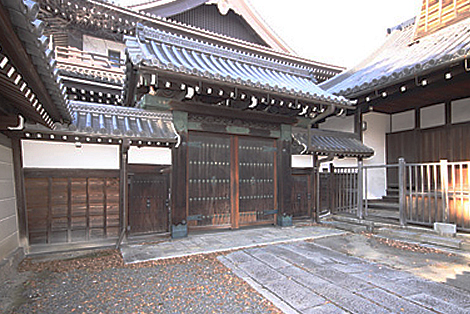 The Onarimon gate is topped with a tiled roof in the shape of a book laid face down. On the sides of the main gate, attached are slightly lower walls. The gate is assumed to be constructed in the late 18th or the early 19th century. 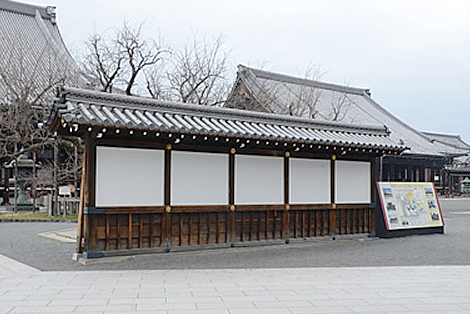 Mekakushibei literally means "screen wall," which is often built to block the pedestrians' view into such places as Buddhist temples, Shinto shrines, and large landowner's residences. The wall consists of a wooden dado and shikkui or plastered screen, which is topped with a tiled roof in the shape of a book laid face down. Assumed to be constructed in the late 18th or the early 19th century.

The mud wall that has a wooden board in its core is topped with a tiled roof in the shape of a book laid face down. On the surface of the wall, there are five horizontal lines, which were originally used by temples whose head priest was an imperial descendant, however it is not applicable to Hongwanji. Because of that origin though, the number of the lines on wall symbolizes the status of the temple and the highest number is five. Assumed to be constructed in the late 18th or the early 19th century.

Estimated to be more than 400 years old, this splendid tree has been designated as a Natural Monument by Kyoto city. With its branches appearing as though they are roots spreading up into the sky, it is sometimes referred to as an "upside-down ginkgo." Legend also has it that the tree spouted out water in attempting to save the temple halls from catching on fire, so it is also called "the water-spraying ginkgo."

This collaborative piece of art designed by the famous architect ITO Chuta, was originally built in 1895 as the main office of the Jodo Shinshu Follower's Life Insurance Company. After being used for different purposes, one of which was the Research Center of the Jodo Shinshu Hongwanji-ha Buddhist organization, in 1958 the first floor of the building was renovated to be used as a Hongwanji-affiliated infirmary, Asoka Clinic. After the clinic moved out, it has become the Hongwanji Dendoin, literally meaning a facility for propagation, where Hongwanji priests come to further their studies. This brick building went through a 2-year restoration from 2010 to 2011.

The wooden plugs found in the temple corridors

The corridors that stretch out from and bridge between the two religious halls have a variety of wooden plugs covering knotholes and cracks on the planks' surface. Many of them were made into various shapes including animals, flowers, things related to nature, and numerous forms related to Japanese culture such as hammers and fans by the carpenters who engaged in the repair work. During your visit to Hongwanji, please enjoy locating some of carvings and appreciate the playful imagination of the carpenters.